A downloadable game for Windows, macOS, and Linux

The game is about a boy who is left home alone. He downloads a game on his phone and starts playing it.  As a player, you make choices consequently affecting the ending. There are three possible endings - bad, good and easter-egg ending. Would you manage to find them all?

The game was made in 48h for Sensei Game Jam 2020 and took the 1st place in the main category. The theme of the jam was "Don't trust the game".

The game was made by BroWar Collective:

He had fun with this one.

how do you get in to the game

A fun little choose-your-ending experience! I don't know if I got all of the endings but I liked the art style! Keep up the good work and hope to see more from you!

I had no idea what I was doing right or wrong but I do like the idea of this game. Game start @ 29:50

I played you game and I really loved it. I'm sorry I contact you through here but I can't see any other way to reach you (I'm also kind of new in this web).

Thing is, I'm a sountrack composer and I wanna start making music for videogames, and I really like your games (I loved the atmosphere in Teenage Heart).

If you wanna see my works and/or contact me, go here ---> www.alvarobasanta.com

I take a while for the good ending in my head

realy nice shit i loved it

Hello Pinhoug! Thank you for this video!

Have a nice day!

Hi Kimmy! We are glad to hear that! Of course you are free to make as many videos as you want :)

thank you very much!

Of course Kimmy! You can download it and record a video without any problems! Have a nice day too!

thank you! I look forward to playing your game

I liked the game. I found it unique and interesting.

Heya! Just played it over on my channel and really enjoyed it!

Hey Nervouslatte! Thank you for the video. Pretty nice that you've reached all the endings. Cheers!

Reply
Hey It's JK47 days ago
Really interesting and good game. Nice to sit back and not get scared but still feel scared.
Reply
vvrvvd46 days ago

That was exactly what we aimed for :) We do appreciate your video.

does this game has jumpscares? :(

We wanted to aim for more psychological experience so the game is kept in the horror tunes but doesn't contain jumpscares :)

Played your game in an indie romp video I made. I'm a tad confused though since the toy box went missing before my character was seen walking by the river with it. was I the child?

Your game starts at 5:20
Reply
vvrvvd46 days ago

You may have been the child and at the same time you may have not :) It depends on your interpretation of the ending. Thank you for putting us in the video LordofNope!

Thank you for the video SnickerDudeAI! We actually suggest trusting at least your family tho : D

Amazing game but the ending didnt seem right.I didnt know if my game crashed or not, after the mom sent the message, I thought there was more to it as what happens wasnt really clear, but I really like it!It gives you a lot of freedom to move objects around and I really like the style of it!

Thank you for feedback moonlight6966! You are definitely right - we are planning to expand the ending in the future along with the entire game. Stay tuned for that :)

The game is short but I fell in love with it anyways, I like the creepy feeling of being watched at all times and the different endings. I like that the game makes you theorize about what's REALLY going on when you do the bad ending.  Consider watching the video and if you enjoy it, subscribe to my channel.

Thank you for playing Don't Trust ImmaGhost! Yes, we do wanted the players to come up with idea what could have happened with main character as we strived for more psychological experience than horror experience. That's really nice you have noticed that :)

Really unsettling undertones halfway through after doing what appears to be innocent chores. Loved the delivery, and the snark if you decide to rebel.

Thank you very much! That was exactly what we wanted to feel for the player.

it crashed my computer? i launched it on my 2012 imac and the computer just turned off. i am assuming that its just my computer being a pos though. it looks like a nice game! i would love to be able to play it

It is very unlikely for the game to crash you computer. Do you have enough disc space for launching the game?

system requirements? i don't think it will run on my system

We are not able to tell whether the game is running on such specs. Did you try to play it? What was your experience?

This may happen when your graphics card doesn't support the newest OpenGL  versions. I suggest updating  drivers but if it doesn't help, there might be nothing  more than upgrading hardware to do.

A game with 3 endings including a secret one ( my video contains spoilers on that one as i got it first try i think),the game has interesting physics to be able to throw things around and a has pretty good concept when it comes to gameplay , for me however i felt the endings were very lack luster and especially for the bad end it would of been nice to see more horror thrown in.

We resigned from horror tricks on purpose to make Don't Trust more thriller/drama with only a little feeling of menace in the gameplay. We do know the endings are not the best ones we could get but still for 48h it was all we could do. Thanks to all the feedback we are planning to develop the idea more in the future so stay tuned :)

Thank you very much IndieGamerScott!

Tried this game out to see what it was about. I don't wanna be rude but I didn't really understand it. It took me a while to figure out the controls since I didn't read them off this site first and the ending didn't really feel like an ending to me. I honestly thought I wasn't doing something right or maybe I broke it or something. I'm still not 100% if I beat it or not haha! Though there was an interesting thing you did with the toy box. How you made it move closer to the _____ if you didn't pick it up. Would be neat to see more things like that happen if you choose not to listen and follow directions. Just my two cents is all. :P

Thank you for comment and the video! We do know that the ending is not clarified enough and may be hard to notice - we had 48 hours to make the game and didn't think about it that way. We are thinking on extending the idea and making Don't Trust more "horror" experience in the future so stay tuned.

It's all good just giving my opinion is all. Would like to see what else you do! I'll have to keep an eye out!

Well I downloaded this game & it didn't work. Just gave me a white screen. :/

Could you tell us what version you downloaded (Win32, Win64, Linux or Mac)?

Windows. Sorry, I'm never on here & don't talk via comments. Please send me a direct message on my Twitter, (just check my profile on here for the link).

Game was interesting!  Had fun trying it out!

Thank you for playing and recording the video! We do enjoyed that! :)

Really well done for the theme! Had a lot of fun playing with knives and trying to get the different endings!

Thank you Pecanyoutube for recording this playthrough!

I'm not too sure, but I think I got all three endings lol. But short or not, I enjoyed the game :)

Hi SpazzKing! Thank you for this video! :)

Awesome Game! I had a great time recording it and playing and it really through me for a loop. Great Job! (Starts At 10:34)

Hello PEK PLAYS! Thank you so much for recording this video! Greetings from our team!

is this also supported on chromebook?

Hi RandomPotOfChillli! Don’t Trust is not supported on chromebook.

y did you take it off mac? can u get mac on there back plz mate

Hi Ooofatron 6000! We are sorry but we have not build mac version at all yet. It's planned for tomorrow as we will be able to access mac pc for building purpose then.

The build for macOS is just uploaded :). Enjoy!

Hello CaptainLuke! You are right that the game is not so long :). Thank you for playing it!

What I liked about this game:

2. The idea of getting new goals through the phone is very neat and sinister because there are real life games like this that end up in kid's death. Really creepy!

3. Detalization is very high. THe phone has a battery that is constantly going down, the dpiser-man poster, the coffee poster, interactable books - nice details!

4. A couple of endings. Makes you replay the game. Cool!

What I disliked about the game:

1. It's a bug, I think but at the end the TV dissapears - you can see that in the attached video. You can see only parts of it.

2. The door constantly fights you. It closes too fast so sometimes it just hits you - also shown in the vid.

3. The knife makes sounds of falling when you just near it. It made me jump XD

Overall, the game is awesome! You can see it in the video (it's the second one). I hope the feedback was useful! Though, I think the game missed good oportunities for spooks such as windows or ceiling. There might me something or someone for a short period of time - but that is just a suggestion. So, my rating is 5/5. Bugs that I mentioned does not make the game less fun and enjotable)

Hello Erderi! Thank you for the video and long review! Every opinion makes us better game developers. We've fixed the bugs in the latest update so again thank you for playing!

If you ever start receiving weird text messages from strangers telling you to do weird things and eat cookies. DON'T TRUST THEM! In fact never even trust any texts. Too risky! Also Don't eat the cookie! It's stale!

Hey Sugarcat! Thank you for recording this funny video and playing our game! Greetings from our team! :)

Probably because of your Operating System version. We will upload more platform-dependent builds(Windows x64/x32 and Linux) today. Sorry about that. 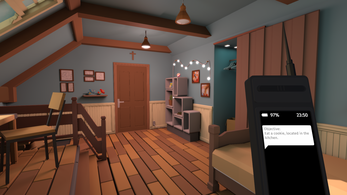 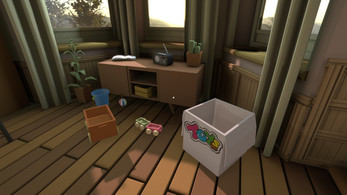 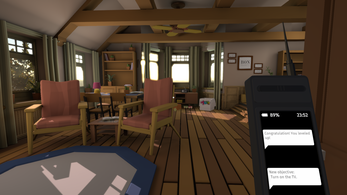